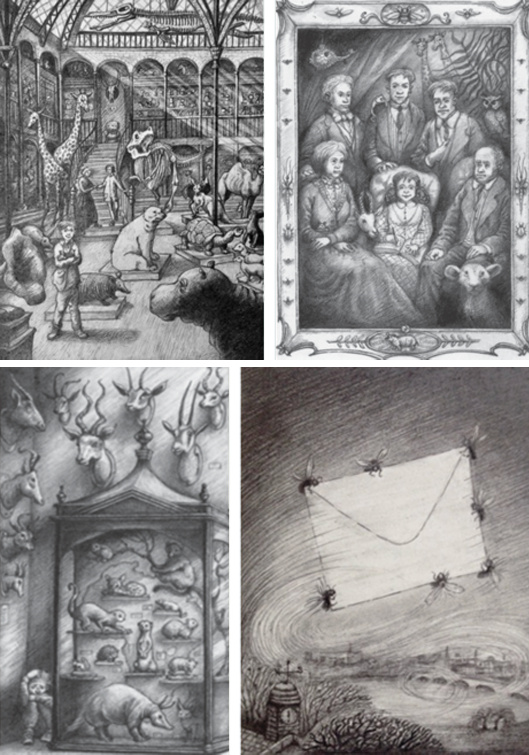 The invitation was delivered by bees. It wasn’t addressed to anyone at
all but Ben knew it was for him. It would lead him to an old shambolic
museum full of strange and bewitching creatures. A peculiar world of
hidden mysteries, and curious family secrets…and some really quite
dangerous magic.

Eleven years ago, at the other end of a long hallway in the Peabody Museum in Boston, I saw a stuffed pygmy hippopotamus. I sketched it, because I like sketching in museums, and because it seemed important. As I drew, I had a sense of waiting for something to happen; waiting for someone to arrive; waiting, not only in the present, but in the past and the future simultaneously, and it seemed just then that the hippo was waiting in all of those times too. Perhaps it was waiting for me to write this book.

I love museums. It seems to me that in every museum there are some exhibits (like that hippo) that appear to have more life about them than the rest. Often these objects have been much handled, so they can appear worn and grimy; or else they are shiny with use, or polish. Perhaps they were especially treasured for a while; or the person who found them had been seeking them for a long time; or the craftsman who created them loved them so much he or she didn’t want to part with them. Indeed, it is almost as if they are haunted by the thoughts and fingerprints of the people who once loved them.

Why do humans collect things? So many of us do. Is our yearning to choose, and own, and arrange, one of the ways we try to control our chaotic lives? Perhaps we even collect and order things to distract ourselves from the slip and slide of time? I am a collector myself. I have collected up the characters for my book from the real museums I have visited. I have sifted and shifted my collection until it formed a story with my own imaginary museum – the Gee Museum.

The story itself didn’t surface quickly. First there were the objects themselves, and some jeopardy and a touch of magic. Yet I wasn’t sure how these objects I had grown to love could be saved – until I invited a boy called Ben into my museum. Ben came wandering in, hunting for a glimpse of his own past, hoping to find an echo of the father he didn’t know amongst the objects in the Gee Museum. He finds more than he expects. He finds a whole bunch of family secrets, and new friends; but he also finds danger and magic – more than he ever conceived.

That is the story in the words. Within it there are also two real folk tales that I retold within the story. The Watercow story is a folk tale from Liberia. The Egg-witch story originates in Eastern Europe. And I like to entwine my words with extra visual stories so I hope readers will enjoy visiting the Gee Museum in the illustrations too. I’ve made many drawings of it now. They are based on my sketches in the museums I have visited in the last ten years. I owe a particular debt to the Peabody Museum in Boston where I first saw the hippo, and also the glass apple, and the elephant bird’s egg. Flummery and the sitting polar bear come from Tring museum just outside London. And a special mention must go to Oxford where I live: the Sengi, the live bees, the Witch in the bottle, the Little Ship of Venice and too many others to mention, were inspired by exhibits in the Oxford University museums – indeed some of the story was written in the Natural History Museum café.

The museums I have mentioned thus far are wonderful scientific institutions. However I think the Gee Museum itself is more like the small museums that you can find in most towns; the sort of museums that are sometimes in danger of closure because people have forgotten about them, or never really looked hard at them; the sort of museums that have a more eclectic collection, and were often founded by generous people who dreamed of sharing their private passion with other people in the future. Sometimes, in those places when I listen hard in the shadows, I think I can almost catch their words and thoughts gathering in layers together with the thoughts and words of past visitors. And I wonder if what we call the atmosphere of a building is actually a certain kind of alchemy made up of these left over moments.